Mantra of 'grooming successors' in African politics, reality or myth? 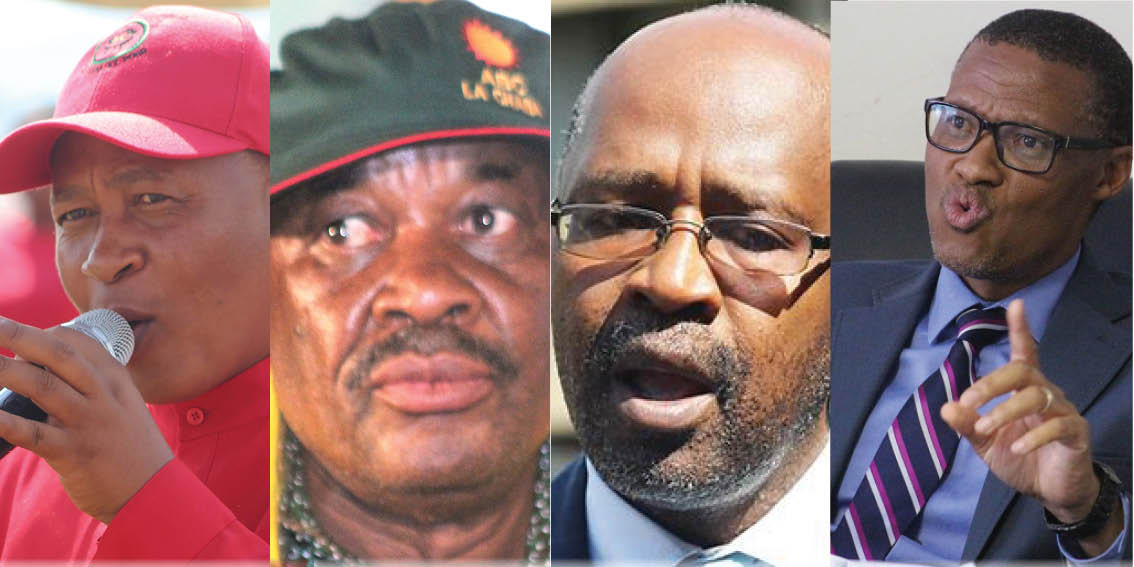 Though deputies often appear as automatic successors, grooming successors has proven fallacious and leaders have dodged this question on grounds that they cannot impose leaders on their followers

MASERU: The discourse of grooming successors in Africa, an idea parroted as though it was a leader's job to pick among a party's politburo who should succeed him. Is this just a mantra that has little meaning or is it real? This million-dollar question is critical as most African leaders do not want to be succeeded by powerful individuals who will take over when they leave office. They stay too long, mess up the economy and when they realise that people are tired of seeing their faces, they either parrot the idea that they are stepping down or they are not unceremoniously removed. thiskingdom.com analyses this mythical belief that African leaders have the power to groom their successors.

In most African countries, leaders overstay, and by the time they leave, there is no mature politician to take over for a number of reasons. Either those who had the potential to succeed them according to followers' assessment had waited too long, but out of impatience, formed their own parties or that they have been whisked out of the party by the leader who fears challenge. Therefore, grooming a successor is only a fallacy that has not meaning. In the South African experience after gaining democratic rule in 1994, Nelson Mandela groomed Thabo Mbeki as his obvious successor when he left office in 1999.

Though Mandela was still able to proceed to the next term after the 1999 poll, he defied the odds and chose to step down. He passed on the baton to his obvious successor, whom he had developed as both deputy leader of the ruling African National Congress (ANC) and the government. He had levelled the playing ground for Mbeki to smoothly come in and showcase his talents. He had created an enabling atmosphere such that when he leaves, there was no doubt about who would take over. His case was phenomenal, given the hunger with which African leaders want to entrench themselves into public office. Having languished in jail for 27 years, Mandela could have wanted to regain the lost time by staying on, amass power and wealth and leave at a time when he was no longer welcome. To the contrary, he did not do so. one reason is that South Africans made a constitutional provision for term limits so that leaders rotate.

This is not the case in other countries, where term limits are not constitutionally provided for, which gives power-hungry leaders the latitude to enjoy the endless stay in office, way beyond their required time limit. The issue of term limits is a measure to curb overstaying in office by leaders who end up being enemies of their own people. A different case in point is that of Namibia, where Sam Nujoma, who, after enjoying benefits of state house in the two constitutional terms, manipulated parliament to amend the constitution to allow him a third term in office. If it was not for the term limit, which he first manipulated, Nujoma could still be in office now. His successor, Hefikepunye Pohamba had it tough to entrench himself and set his foot on the ground, as Nujoma was still a political ghost, even after his term had expired.

Extreme cases in Africa are those of Zimbabwe, Angola, Zambia, Kenya and Uganda. Rwanda joins the fray, with Paul Kagame now at two decades in public office, though his case is different because he is doing well in as far as development of that country is concerned. But he risks turning the tide of development if he does not step down before he spoils the broth like Robert Mugabe of Zimbabwe did. The latter deliberately did not put a term limit in his country's constitution because he wanted to stay too long without challenge. He also did not want to groom a successor, though Emmerson Mnangagwa was an obvious one in the public's eye. He was disgracefully and unceremoniously removed from office after being on the helm of the country for close to four decades in 'a coup that was never there.'

Next door in Zambia, the founding father, Kenneth Kaunda spent 27 years in office (1964-1991) without challenge. Aspiring candidates whose hopes had been shuttered by his long stay had to connive with oppositional elements to topple the leader through a democratic election in 1991. This brought massive shame and disgrace on the internationally-celebrated Kaunda. In Kenya, Arab Mooi stayed in office for a quarter a century since that country gained independence and left office when realising that he could not withstand the pressure within his party and outside. This left a trail of damages in that country's political scene. He too did not groom a successor, but in the public's view, there were clear signs of potential leaders.

The same can be said about Angola, whose godfather, Ecuador Jose dos santos stayed in power for close to four decades and only left when he felt opposition within his own ruling party. He and his family had amassed not only political power, but also economic wealth. His daughter, Isabel dos santos is the richest woman on the continent. No doubt, his father used his political power to siphon economic spoils towards his daughter. This is Africa.
At home, the Democratic Congress (DC) leader, Pakalitha Mosisili has recently left political office, but not of his own volition. It was after he had sensed that there were clear signals he was no longer wanted by a majority of followers and he declared his retirement from active politics in his DC. Like other African political parties that have no succession plans beyond their leaders, the DC leader did not groom a successor, though Monyane Moleleki who was a stalwart and kingmaker for the party since its formation in 2012 was a clear successor. Due to the sway that the outdoing leader had over the party, he picked a successor, Mathibeli Mokhothu from nowhere. This is what is mistakenly embraced as 'grooming a successor', but in the case of Mokhothu, he was not groomed, but parachuted into the political scene by his predecessor. This was to the distaste of stalwarts in the party, who had eyed the top seat.

With the influence from Mosisili, Mokhothu became a darling of the masses.  Unsuspecting and gullible members were manipulated to choose Mokhothu on top of stalwarts like Tlohang Sekhamane, just because the incumbent had support for Mokhothu. If it was the other way around, Mokhothu would not be the DC leader today. To assert that members chose Mokhothu is to be only politically-correct, whereas the reality is that the political winds blow in the direction of a leader, who becomes a cult of personality. Whoever is not in his good books gets discarded to the trenches and soon dives into oblivion. Sekhamane committed a political suicide by attacking the leader and the potential successor, this much to this detriment as he only got a disappointing 84 votes during an elective conference.

This issue of grooming a successor is another factor that could be considered in the ABC's internal politics. Thabane is not a kind that can groom a successor because he is not confident about his grip on power and often doubts those who are likely successors by virtue of them being his deputies. First, it was the late Maboe Moletsane, who could be trusted to take over if death had not cut his life short. The next was Tlali Khasu, another political novice that had little to show that he could clinch power should his boss step down. But with a proper grooming, Khasu could grow as there is no political school in Lesotho's politics, except to amass power through experience over time. Thabane has his own insecurities about leading the ABC and he denied Khasu he golden opportunity to learn and build himself, especially when the leader was in self-imposed exile in South Africa during the period 2015-2017. It was opportune moment for Khasu to showcase his abilities to lead the ABC, but he was denied that chance by the all-power, Thabane who ruled the party by remote control across the borders.  Khasu felt disenfranchised as a deserving potential leader in the absence of the leader and defected after a brawl erupted and he formed his party, which never saw light of day.

Prince Maliehe was just there to fill the space when a substantive candidate was to rightfully occupy the office of deputy leader and the ABC members have expressed their will in favour of Professor Nqosa Mahao. Though feeling in some political quarters is that Mahao has been parachuted into the ABC leadership echelons from nowhere, as he has no track of record in the ABC, he clinched power. This was even against the norm that one has to have the support of the all-powerful leader of a party like Mokhothu did, but Mahao was in fact detested by the leader. The moral campus that guided ABC members made Mahao a deputy leader of the ABC after a trail of attempts to dislodge his chances of election into the ABC's second-in-command position. This position could turn Mahao into a prime minister of Lesotho in the future if his fortunes go his direction until he becomes leader of the ABC.
Thabane and his clique have arrogated unto themselves the power to refuse the ABC members' will, which was expressed in a ballot box, in daylight. They wanted to choose for the members, who should succeed Thabane and he is leading that unfortunate episode. If Thabane is not careful, he could spell disaster in the politics of his party and of the country by leading an undemocratic practice rein in the ABC, which has turned out to be a most developing party in Lesotho. His fate is even given credence by what some cynics call capture of the party and government by his sweetheart, Maesaiah who is, like Grace Mugabe perpetuated her husband's downfall. Rumours are that the First Lady is pulling the strings in the party and government and that his husband is taking party and government decisions not from the party's politburo surrounding him, but from his wife. This has gone to the extent that to survive both in the party and government, one has to first have to be in the good books of the First Lady.

In the case of Zimbabwe, even for those who still had pretentious love for Robert, this was vilified by his wife, Grace's manoeuvres within the ruling ZANU-PF. She was orchestrating the firing of ministers, running public office by remote control and instructing her husband what to and what not to do in the party and public office. The same is the case for Lesotho, Maesaiah is pulling the strings under Thabane's very watch. If Thabane wants to spare himself the disgrace that Robert faced, he must start now to consider his exit before it is too late. He has nothing to lose, since his pension is already sorted out, his party has afforded him the life presidency and his children are all old enough, no dependents except for his darling, who too, will have something as former First Lady. What else is there to cling into office for unless there is some mess he wants to clear before leaving office, lest it follows him? Some ABC members have already showed distaste about the manner he runs the ABC. He has created internal opposition, which might turn out a sword against his ambitions of staying on until 2027 as he has declared.